Before 1800, the funeral coach was used only for the highest class. Most of the dead were brought to the cemetery by stretcher. The number of funeral coaches increased rapidly in the nineteenth century when cemeteries began to be built outside the cities. Carriages came in different classes, the most luxurious was the 1st class state carriage. Only two of them have survived in the Netherlands, one of which is in the collection of Museum Tot Zover (currently in storage).

On His Deathbed, 17th century

A priest on his deathbed. He wears a chasuble with maniple, which indicates his high rank. The painting is on loan from the Dutch Order of Jesuits. They believe that this painting depicts their founder Ignatius of Loyola (1491-1556). However, that is unlikely and the deceased remains anonymous, just like the painter. Thebeautifully painted work is from the seventeenth century. It is one of the few death portraits in Dutch museums.

Visual artist Maria van Kesteren (1933) made a series of bell-jar urns in 1995. These bells encase the ashes with warmth and dignity. Van Kesteren always designs in wood, which she turns herself. “The fascinating thing about woodturning is that you constantly and consistently strive for pure form based on one principle, following the circular pattern of the wood.” Her work is displayed in museums such as the Stedelijk Museum in Amsterdam and the Haags Gemeentemuseum.

In this very rare piece, the hair is processed in different ways: whole strands are bent into petals, but it can also be seen that hair has been cut and then sprinkled on pre-formed buds and leaves. In addition, flowers are made of braided hair strands. Hair was widely used in the nineteenth century in memorial works such as jewelery, medallions and small "hair paintings". However, a bouquet with hair is unique.

Daguerreotypes are the earliest photos. They are unique examples, there was no negative. They were very expensive works, so they were often kept in beautiful boxes. The union case indicates that it is probably American. Child mortality was very high at the time. Two thirds of such photos contain a child who died young. A post-mortem photo was often the only portrait people had of the deceased child.

The Ford Model T (1908-1927), was the first mass-produced car. A variant was the Model TT (truck), with an extended and reinforced chassis. The Model TT was produced between 1917 and 1923 as a chassis; a specialized bodywork company finished the car. Models T and TT signal the approaching end of the carriage, including for funeral transport. Museum Tot Zover owns more than 250 scale models of hearses, the largest collection in Europe.

Collecting death masks was extremely popular in the eighteenth century. Enthusiasts tried to gather the largest possible collection of "celebrities".

Death is an important theme in Satijn Panyigay's work. The melancholic photo series Behind Death's Door shows the dismantling of living spaces of recently deceased people. The next of kin leave the eviction to specialized companies, windows and doorways cannot be seen, there is no contact with the outside world. Trivial objects are the last remnants of a past life. Traces are erased, memories fade.

Around 1900, a battle was fought for the reintroduction of the crematorium. The diamond workers set up their own association: the Workers' Association for Mortal Burning (AVVL). For example, they wanted to make cremation accessible to the less well-off. In 1935 they made a propaganda film. This black and white film was considered extremely modern in its time. The Leeuwarder Courant of March 15, 1935 even spoke about 'the development of the earth and its inhabitants ... in fast flashy images'! Curious? Watch the movie on Youtube.

In the nineteenth century it became fashionable to use special dinnerware during mourning. Initially, Wedgwood's 'black basalt ware' was chosen. Soon Wedgwood started making special mourning services, with matching decorations. Other manufacturers soon followed. Not only black pottery was used, but also pressed glass, which was cheaper. Such crockery usually consisted of four or five parts: tea and / or coffee pot, milk jug, sugar bowl and a rinsing bowl. A well-known Dutch producer was Regout.

The draftsman Johannes Hubertus Reygers (1767-1846) also made paper cutting works. He occupies a special place within this genre, because he made three-dimensional work. The work is signed and dated 1818, but the preacher and his wife portrayed are unknown for the time being. Their portraits are probably copies of the originals, which were made around 1780 by the German artist Johann Anspach (1752-1823).

The artist PJ Roggeband designed a black cube that relatives can put on their noses as an outward sign of grief. He calls it the Sneu, anagram of nose. Cf. party animal. 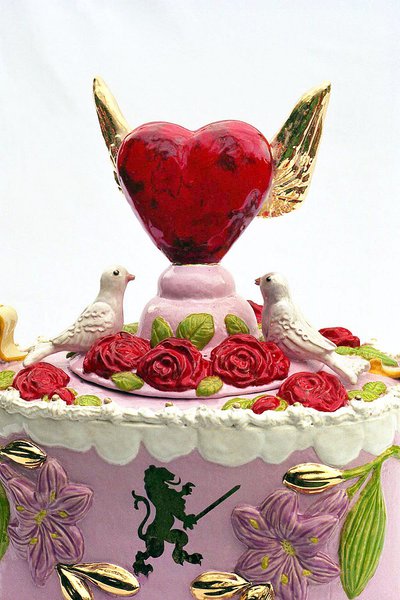 This urn for Guus Vleugel is an extravagant cake, cheerfully decorated and over-the-top. The original candles are still in it. The urn is our most recent addition, a true masterpiece. It is made of ceramic and designed by visual artist Guusje Beverdam.